A win at the weekend made it four unbeaten – now the plan is to keep that upward momentum going against Birmingham on Wednesday evening.

Supporters came back for the first time in eight months for our match against Nottingham Forest, and played their part on Saturday afternoon.

Now it’s a midweek clash that we have to look forward to – a different kind of atmosphere under the floodlights, but the goal unchanging – three points is our aim!

Tickets for this fixture are now sold out - please do not travel to the game unless you have a physical ticket, whether that is a paper ticket which you received by mail or a print-at-home ticket.

If you selected the print-at-home option, make sure you follow the instructions to use it in the scanner - see the video below for a quick guide on what you need to do.

Upon the return to Madejski Stadium, your safety is absolutely top of the list. We want three points, we want a good performance, but more than any of that we want to ensure that our fans are safe and secure when they return to RG2.

Click here to find out more about measures that have been put in place and how you can play a role in keeping your fellow supporters safe, too. And keep your eyes on @ReadingFC on Twitter for more safety information as we build up to the match.

Birmingham ended their six-game winless streak at Bristol City at the weekend - they'll be looking to repeat the feat and take another scalp of a club among the front-runners when they visit Madejski Stadium on Wednesday.

After falling to Cambridge in the Carabao Cup on the opening day of the camapign, their league season got off to a perfect start under Aitor Karanka; a 1-0 win against last season's play-off finalists Brentford marked a winning beginning to 2020-21.

Only three more victories have followed, however - back-to-back triumphs against Huddersfield and Preston in October, and then Saturday's win at Ashton Gate thanks to a late Harlee Dean goal.

Tim Robinson is back at Madejski Stadium, as he was in September when we met Barnsley - he showed two Tykes players the red card that day, as defensive duo Michal Helik and Mads Andersen were each dismissed in our 2-0 win.

He actually refereed this fixture last season; that fell the Blues' way as they took a 3-2 win and three points back to the Midlands.

Lee Venamore and Andrew Fox are assistant referees, and fourth official for the evening is Robert Massey-Ellis.

Supporters’ Trust at Reading have prepared some notes in the absence of a physical programme – click here to read their column on the STAR website.

We wish to politely remind supporters that the football club is responsible for their conduct at all matches (home or away) and any person committing a football-related offence or involved in serious misconduct at any match will result in a club ban. Examples of serious misconduct include discriminatory, offensive or abusive chanting, entering the pitch, persistent standing and throwing a missile. Supporters witnessing any incidents of serious misconduct are encouraged to report this to the football club by texting 80800, beginning your message with the word SAFE.

Reading were left to rue a saved penalty in the second half that cost them a point against a very well-drilled Birmimgham City side this evening.

Birmingham started ther better, delivering a very good cross from the right that needed heading clear, then passing their way into the box for Hogan to squirm into a gpood spot inside the box but see his low cross-shot deflected into Rafael's arms off a Reading body.

Hogan ran onto a slide rule pass to fashion another opportunity but the offside flag went up against him before he could test Rafael. And the flag on the far side again rescued the Royals as Hogan scampered onto a threaded ball through the defence and bore down on Rafael who came racing off his line.

From a worked set piece, Reading earned their first opportunity - Ejaria's floated ball was headed clear but it fell to former City man Morrison who first tried to find a pass to Joao but upon seeing his pass intercepted then took aim himself with a left-footed effort that dropped wide.

With 20 minutes played, Richards tried a cheeky first time effort from wide on the left - running onto a loose ball and sending an up and under over Etheridge but also just over the crossbar.

But five minutes later and the visitors had the lead. A fine passing move down the left and an early low cross into the centre found Jon Toral. He took aim and fizzed a low right-footed shot past Rafael and in off the left post for 1-0.

It was nearly 2-0 moments later as Rafael leapt to his left to push wide a good downward Hogan header. And they had their second goal before half-time. Toral again took aim, cutting inside from the right and placing a fin shot beyond Rafael and into the bottom left corner.

The home side tried to respond, Olise afforded some space to run into, but as he approached the edge of the Birmingham box his shot was sliced wide without troubling Etheridge.

Meite nearly latched onto a direct ball from Ejaria over the top of the Birmingham defence, but the keeper was off his line to skew a clearance into the West Stand before Meite could reach it.

The Royals started the second half with obvious intent to get back into the fixure, but an organised Birmingham outfit cleared a couple of good deliveries into the box from Olise and were holding their hosts at arm's length.

Richards delivered a cross towards Meite in the middle, but it was just beyond the Reading forward as he looked to connect with his head.

Just as it looked as though the home side would continue to be repelled by the Birmingham brick wall, Meite toed home to give the Royals a lifeline. Rinomhota's surging run created the chance and his deflected ball into the middle was pounced upon by Meite who got there first to stab home at the near post.

Hogan could have restored the visitors' lead when he darted in behind the Reading back line and bore down on Rafael's goal. The Brazilian came off his line to narrow the angle and Hogan stumbled into a shot that bobbled wide of the left post.

Ejaria swept a free kick over the Birmingham wall but also over the crossbar with 25 minutes remaining and the home crowd were trying to spur their side on to find an equaliser.

Five minutes later and Reading could have been level. The free-scoring forward flicked the ball on for Meite to burst onto and as he was about to pull the trigger, he was dragged over by Dean. Alreeady booked, the City man was sent off after the referee had pointed to the penalty spot. Joao was denied though - his spotkick parried by Etheridge.

City were defending their lead well despite the numerical disadvantage, eating up time at every opportunity and staying solide with men behind the ball at all times.

Sona Aluko was brought on for the final ten minutes and provided a lovely cross with his first touch, City scrambling it behind for a corner as it floated its way towards Joao and Meite at the back post.

It just wasn't clicking for the Royals and our opponents were harrying our players as soon as the ball went to a blue and white boot.

Laurent played a direct ball over the top looking for Meite with two minutes remaining, but keeper Etheridge was off his line to collect the ball. Both players collided though and there was a lull in play as they received treatment at the start of six minutes of injury time. Meite couldn't continue, so injury time would be ten against ten.

Joao came very close to grabbing a late, late equaliser, scuttling onto a low free kick passed into the box but dinking a shot just wide of the far post.

Then Semedo found a route into the box from the right, but his pull back looking for Moore on the penalty spot was played just behind the captain and the chance disappeared.

The Blues hung on and took all three points back to Birmingham.

Tickets for the Royals' meeting with Birmingham City on Wednesday 9th December (7.45pm) are now on sale. As per current Tier 2 restrictions, our capacity for this game is 2,000.

Tickets will be made available to supporters on the following dates:

* We would strongly encourage supporters to buy online wherever possible

We have put together full information about our returning fixtures – which includes parking, getting hold of your physical ticket, and other important information. Click here to read.

Your safety is paramount as we return to RG2 . Click here to read more about how we’re making Madejski Stadium ready for our supporters. 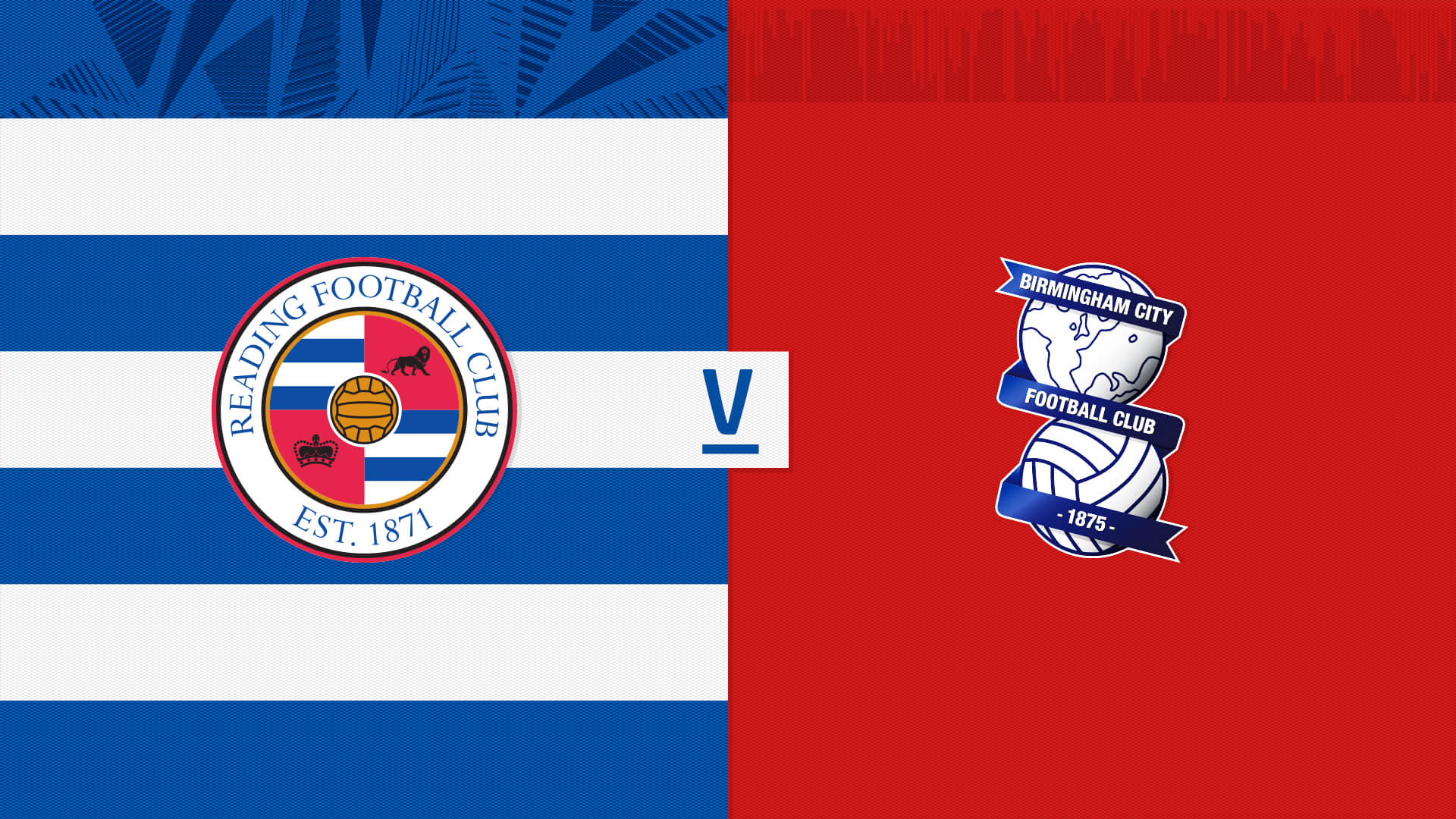 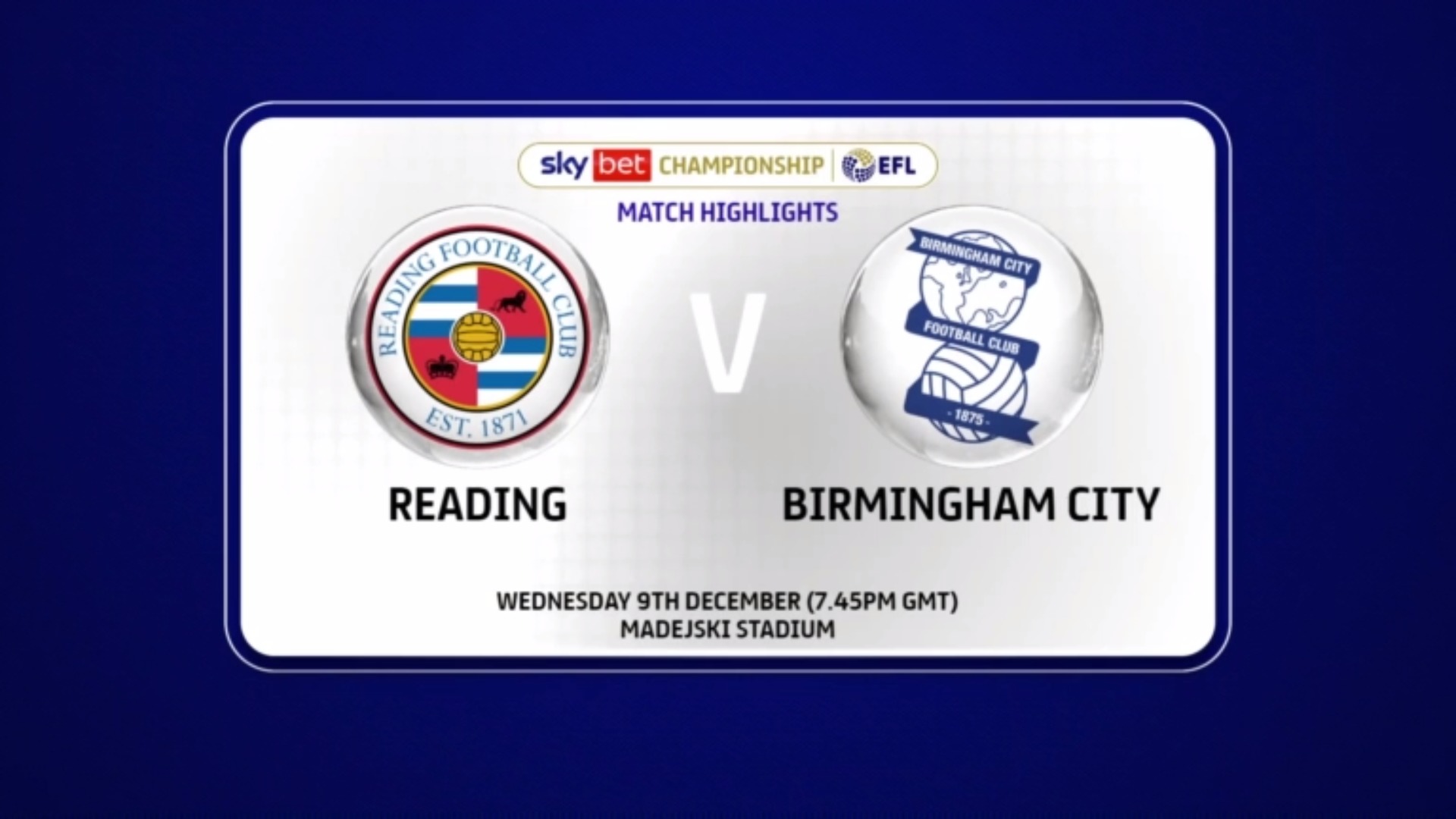 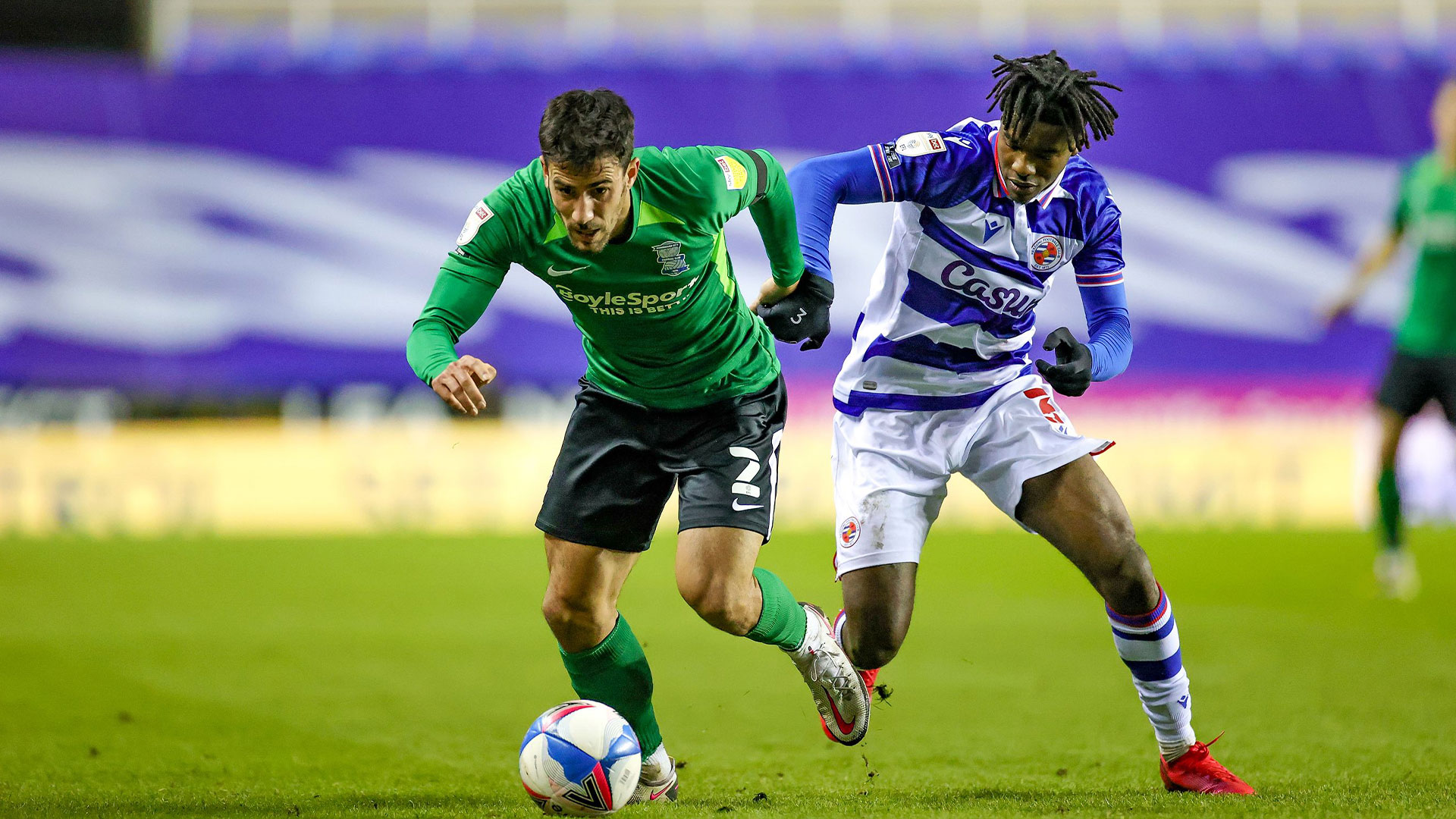