It's a trip to the New York Stadium that's next on the horizon for the Royals, and they will be keen to react quickly on the back of a defeat to Wycombe Wanderers in midweek, against the Millers who themselves have lost four on the bounce.

Paul Warne's side sit 22nd, inside the drop zone, but have a duo of games in hand on the three teams above them. Meanwhile, Veljko Paunović's men can put themselves five points inside the top six with a win in South Yorkshire.

The Royals will be hopeful of completing the double over Rotherham on Saturday, having recorded a resounding 3-0 victory over them in the reverse fixture at Madejski Stadium.

Saturday's trip to take on the Millers is available for supporters to watch via iFollow. At this time, there will be no away commentary on the video stream, however Royals supporters will be able to access the home commentary, provided by Rotherham United's in-house commentary team.

Royals supporters can grab their Match Pass to watch proceedings unfold, by clicking here ahead of our 3pm kick-off in Rotherham.

For the second season in a row, Warne forced an instant return to the Championship for the Millers following relegation, and his team are very much up for the fight as they look to retain their second tier status for the first time since 2016. The Millers are just two points adrift of safety, despite winning just one of their last five.

Within their squad, Rotherham have one former Royal, defender Angus MacDonald spent six years within the Reading Academy, but despite enjoying loan spells with Salisbury City, Basingstoke Town, Torquay United and AFC Wimbledon, he failed to make a senior appearance for the club.

Last time out, Rotherham fell to a 1-0 defeat at home to Nottingham Forest, who continued to climb the table. Their most recent victory came during a 2-1 win over Preston North End, during which the Millers had a Joe Rafferty own-goal and a Ben Wiles strike to thank for three points at Deepdale.

In January, Rotherham bolstered their ranks with the loan signing of Lewis Wing, who arrived from play-off chasers Middlesbrough.

One to watch: Matt Crooks

January's Sky Bet Championship Player of the Month, Crooks has enjoyed an impressive third season with the Millers, contributing seven goals and three assists in 30 games from midfield. His strikes have inspired his side to victories over Preston, Bristol City and Boro.

The Leeds-born 6ft4in man began his career as a youth product of Huddersfield Town's academy, but after six years that included just one senior Terriers appearance and loan spells with FC Halifax Town, Hartlepool United and Accrington Stanley, Crooks departed the John Smith Stadium in February 2015.

He was soon snapped up by Stanley, for whom he left a lasting impression during his loan and he went on to enjoy a fruitful season in League Two that earnt him a move to Scottish giants Rangers in July 2016.

However, just a year later having been limited to a handful of chances with the Gers, he returned home to England with League One side, Northampton Town. He rediscovered his form with the Cobblers, and earnt a move to the Championship with the Millers in January 2019, proving a hit ever since, going on to clock up over 80 appearances to date.

The Royals will hope to make it eight games unbeaten against the Millers on Saturday, as they hope to extend a run that stretches back to April 2015 when Rotherham last got the better of us.

When the two sides met earlier in the season, Yakou Méïté stole the show with a brace that included a stunning bicycle kick, while Lucas João also found the net during the 3-0 win.

Reading have won 22 and drawn 16 of a total 48 meetings between the two teams, dating back to the first time we met in March 1969.

David Coote will be the man in the middle on Saturday, for what will be his second Reading game of the season.

Whitestone has already officiated one Royals match this season, having taken charge of proceedings during our 4-2 win over Blackburn Rovers at Ewood Park in late October. On that occasion, four players were yellow carded, which included Lucas João and Rafael for the Royals.

Nick Hopton and Richard Wild will assist Coote at New York Stadium, while Ross Joyce will be the fourth official on this occasion.

During Coote's 19 league games to date, he has issued 67 yellow cards and three additional red cards.

A polite reminder to our supporters that no unauthorised access will be permitted to this game, so supporters must not travel to New York Stadium.


At this stage of the season, every point is important. And we secured all three at the expense of Rotherham United on Saturday, as Michael Morrison chipped in with the match-winning goal.


Omar Richards and Andy Yiadom return to the starting line-up this afternoon as Veljko Paunovic makes two changes to the side that lost at Wycombe in midweek.

Michael Morrison scored the only goal of the game to earn us victory at Rotherham this afternoon but had to defend like men to see off a physical Millers side at the New York Stadium today.

Rotherham had the first chance in front of goal. Richards conceded a foul 25 yards out and Lewis Wing delivered it towards the back post where the towering Michael Smith rose high and nodded the ball over the crossbar.

But a better chance game Reading's way 7 minutes in. A corner was only cleared as far as Richards who hooked a sweet strike goalwards from the edge of the area. Viktor Johansson did well to push the strike over the crossbar however.

The home side were forced to make an early chance, bringing Ben Wiles on for Clark Robertson following a challenge from Olise, and from the resultant set piece the Millers came close to breaking the deadlock - Smith hooked the ball back across the Reading goal and Ladapo glanced a header inches over.

The Royals looked a threat on the counter attack and a lovely ball was threaded into the path of Ejaria who had space to run into down the left side. He looked to pick out Rinomhota in the middle with a low cross but it was cut out by a defensive leg and Reading had to settle for a corner.

Johansson had to race out of his area to clear the danger when an early ball over the top was chased by an onside Joao. But he couldn't keep out Michael Morrison a moment later.

Richards recycled a cleared corner and swept in a cross to Morrison at the back post. He powered a downward header towards the bottom corner but Johansson parried it with his legs. The ball bounced loose and Morrison was quick to react, getting a toe to it before anyone else to turn it over the line before Crooks could hack it clear.

It was nearly 2-0 minutes later when Liam Moore sprung the offside trap to collect a direct ball down the left side of the Millers box. He turned it inside for Joao at the near post but he in turn stabbed it wide of the left post from close range, under pressure from his marker.

Johansson was out of his area again to boot clear a quickly taken free kick from Ejaria that was aimed at the run of Rinomhota. But the home side posed a  real threat and Matt Olosunde collected a one-two but dragged his deflected shot wide of the bottom left corner.

Every opportunity Rotherham had to launch the ball aerially into the box, they took. And a flick on landed to Ladapo this time who skied a bouncing ball over the crossbar to the Royals' relief.

Reading looked dangerous with the ball on the ground and Olise broke at pace, sliding in Rinomhota before he was fouled. The referee opted to let play go on but Rinomhota was crowded out.

On the stroke of half-time, it so easily could have been 2-0. Ejaria arced a set piece into the area from the right side and it skidded past Joao, two defenders virtually on the goalline and Semedo stabbed it against the outside of the post from a very narrow angle.

Rotherham had the ball in the back of the net only a minute into the second period, when Smith lashed home a wonderful hooked effort - but the offside flag had been raised against the Rotherham striker.

Joao at the other end had a good chance to add a second - darting onto a well-weighted ball through the Millers defence but then in two minds what to do with his shot with the keeper advancing and scuffing the ball harmlessly into the arms of Johansson.

Yiadom looked to rifle a shot through a busy Rotherham box when he chested down a cross from Rinomhota, but the offside flag was raised against the Royals full back as he lined it up and pulled the trigger.

Smith crossed for Lapado, who couldn't keep his header down on the stretch - then Joao got in behind the Rotherham defence and despite being tugged back by MacDonald he stayed on his feet to set up Ejaria for a shot - the midfielder arrowing high over the bar.

The lead looked slender and Rotherham were battling for a goal that would throw the game wide open once more. Morrison did well to block a Ladap shot and then with a quarter of an hour remaining Wing lashed an effort over from outside the box.

Yiadom did well to block the ball when Ladapo looked to turn it goalwards from a cross from the left. Smith then smashed a right-footed effort harmlessly over from range as Rotherham continued to push.

Trevor Clarke tested Rafael with a low drilled effort that the Brazilian keeper gobbled up safely in the centre of his goalmouth.

And in five minutes of injury time, Rotherham threw everything at their visitors. A deflected shot from the edge of the box, deflected off a Reading body and whistled past a wrongfooted Rafael but thankfully wide of the bottom right corner. And Reading withstood the pressure to claim all three points.


At this stage of the season, every point is important. And we secured all three at the expense of Rotherham United on Saturday, as Michael Morrison chipped in with the match-winning goal.


Omar Richards and Andy Yiadom return to the starting line-up this afternoon as Veljko Paunovic makes two changes to the side that lost at Wycombe in midweek. 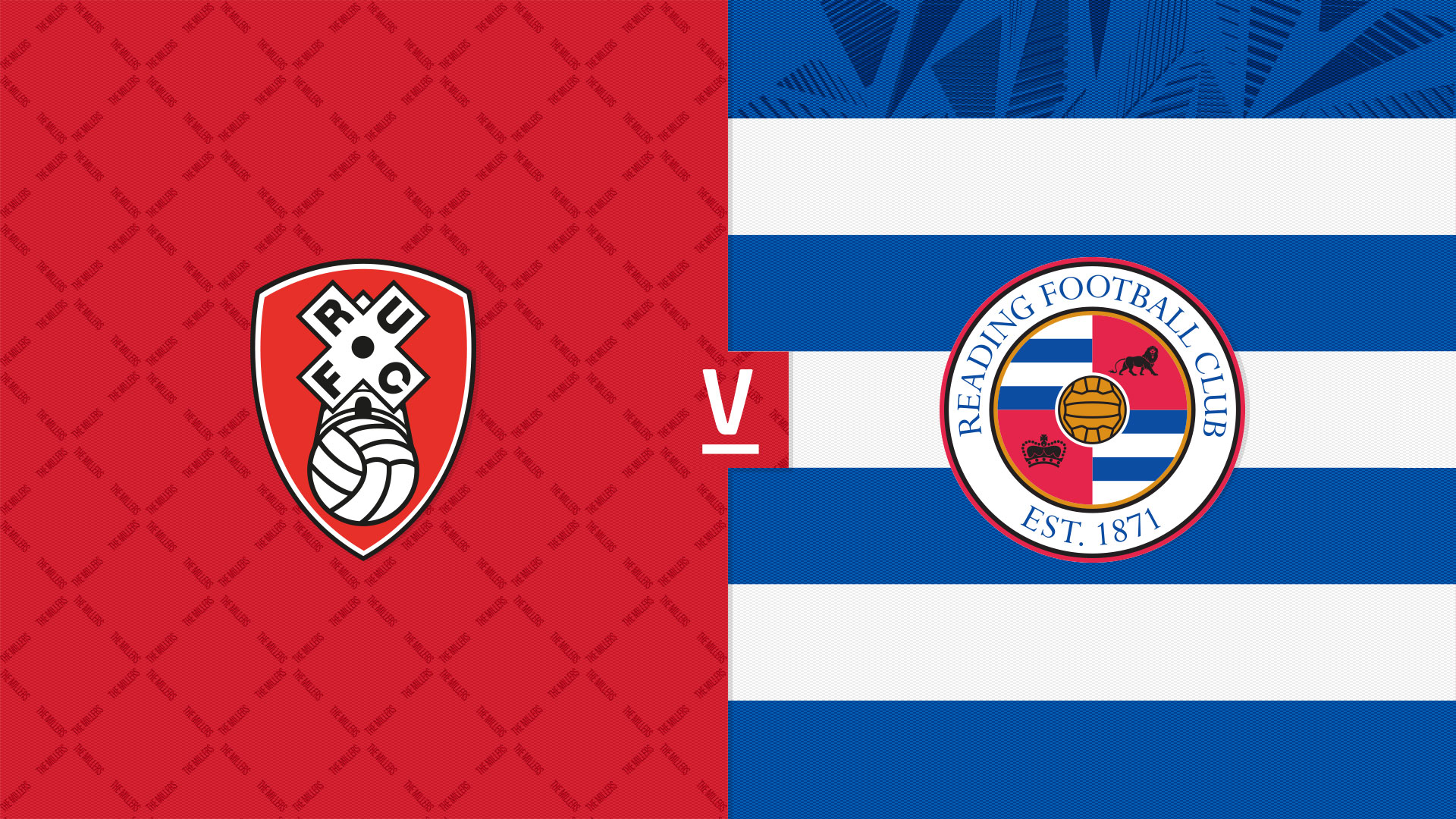 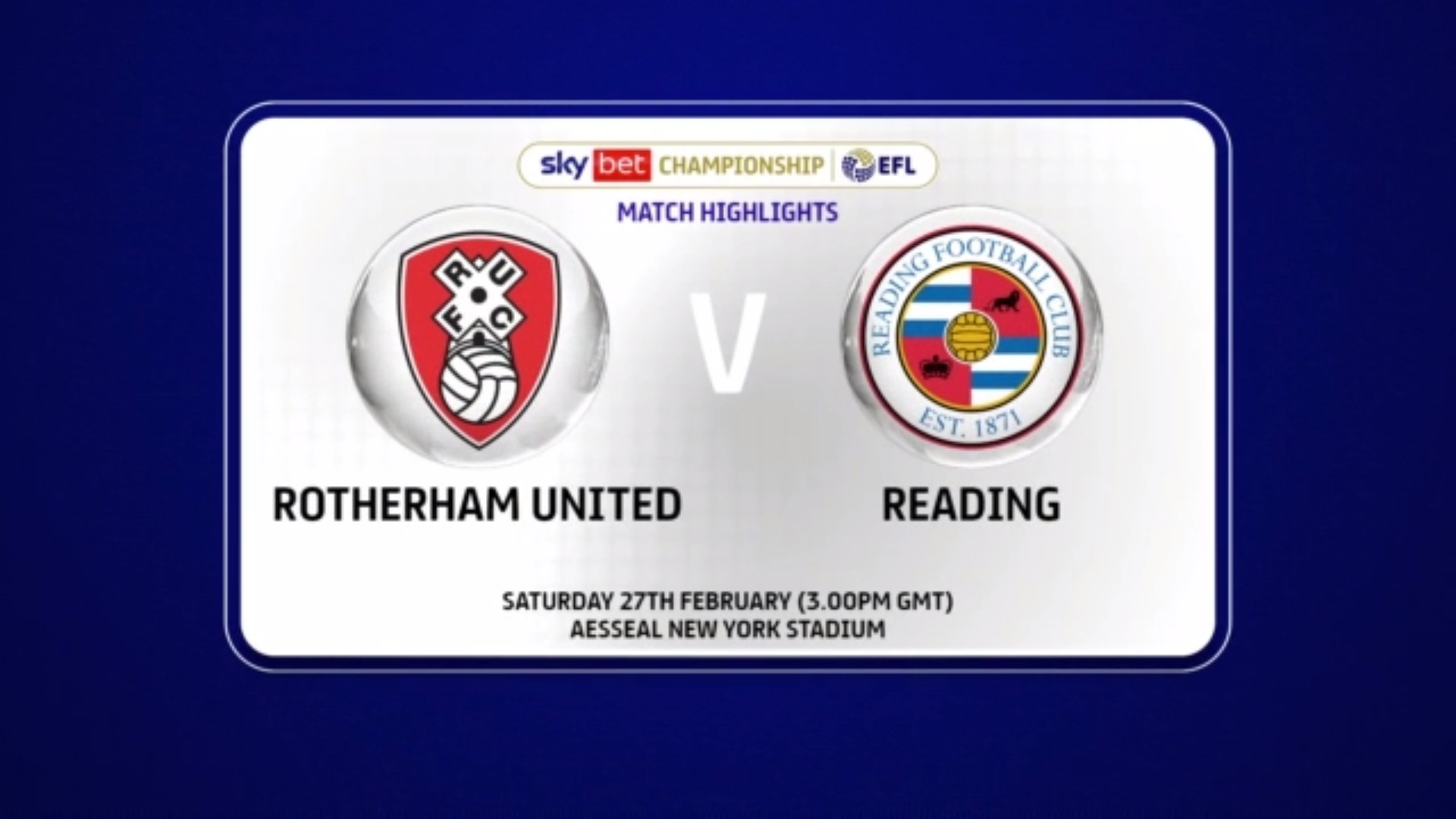 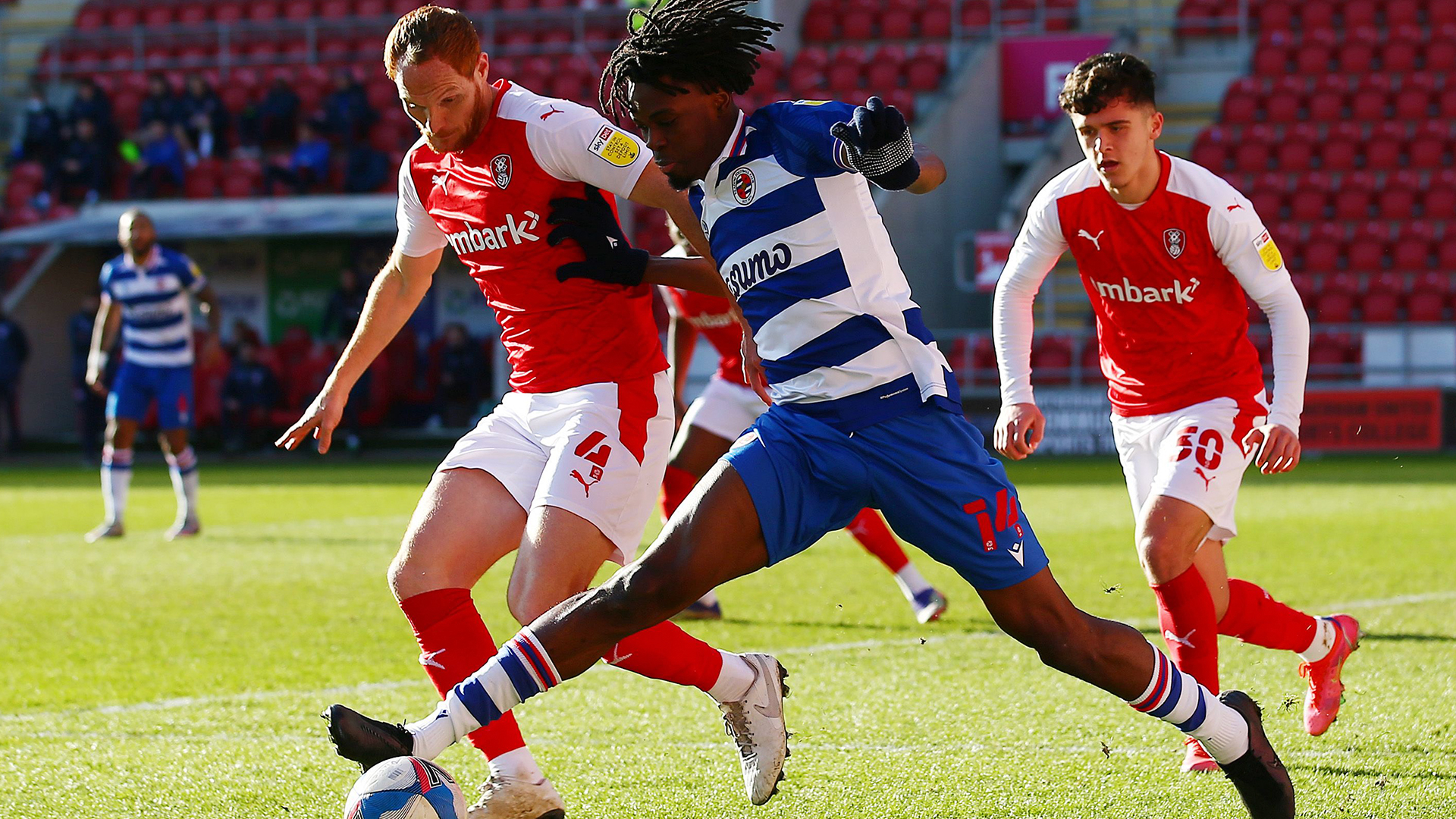