The Royals return to the Midlands this evening for what will be our second game in the space of seven days, as a meeting with Birmingham City at St Andrew's Trillion Trophy Stadium beckons.

Tonight's hosts, The Blues are battling at the wrong end of the table, and will be keen to become just the second team to complete a league double over us, after they edged a tight contest at the Madejski back in December.

Victory and an all important three points for the Royals would see them stretch their unbeaten run to five matches, with nine games to go.

Tonight's meeting with our second city hosts has been selected for live coverage by Sky Sports, which means on this occasion supporters will not be able to watch via iFollow.

It's been a tough season for the Blues, who sit 21st, three points above the drop zone. Their latest defeat brought an end to Aitor Karanka's tenure in B9, and it's now Lee Bowyer who will take charge of his first game as Birmingham boss on Wednesday night.

With the Blues sitting in a dangerous position with ten games left to play, they will be eager to string a run of results together to avoid their race for survival going down to the wire. They have won just one of their last five outings, as they prepare to host the Royals, who in contrast have lost just once in that time.

Last time out the Blues fell to a heavy 3-0 defeat at home to a resurgent Bristol City side. Their last win came at the end of February, as Kristian Pedersen and Alen Halilovic each scored a late goal to secure a 2-1 home win over QPR.

One to watch: Scott Hogan

Following an initial loan spell with the Blues that saw him notch seven goals, Hogan signed for Birmingham City on a permanent basis, and has continued to prove a threat in attacking areas, finding the net on six occasions so far this season. His strikes have earnt his struggling side key victories over both Sheffield Wednesday and Middlesbrough.

Hogan arrived at St Andrews for good in September 2020 having agreed a deal to bring an end to his time with their bitter rivals, Aston Villa. Hogan had spent three years at Villa Park, scoring 10 times in 61 appearances.

While on the books of the Villans, the Salford-born striker also bagged a handful of goals during loan spells at both Stoke City and Sheffield United.

The Republic of Ireland international, who has been capped by his country on eight occasions, began his career in the youth set-up of Rochdale, prior to being released from Spotland in 2010.

Hogan, an out and out poacher, then worked his way back up the divisions, enjoying spells with numerous non-league sides before being snapped up again by the Dale. Having proved himself a Football League player, he then earnt a switch to Brentford, and t was his form at Griffin Park that saw him bank a move to Birmingham, initially with the claret and blue side of the city.

Despite having lost to Birmingham in this season's reverse fixture, the Royals head into their latest trip to the second city having won three of their last four trips to St Andrews.

Our last visit to B9 was one to remember, as goals from Matt Miazga, Yakou Méïté and Pelé saw us to a 3-1 victory over the Blues back in March 2020, our final game before Covid-19 put our season on hold.

When the two teams last met however, it was a tough one to take for the Royals, who will be seeking payback this time around. Two moments of quality from Birmingham midfielder Jon Toral earnt the Blues three points and a 2-1 win at the Madejski during the festive period.

It was Méïté who pulled one back for Reading, before being withdrawn from the game through injury on a forgettable night in Berkshire.

The Royals have won 14 and drawn 12 of a total 52 meetings between the teams, dating back to our first contest with the Blues back in 1986, a 2-2 draw in Division Two.

Andy Woolmer will be the man in charge of proceedings in Birmingham on Wednesday night, for what will be his second Reading game of the season.

Woolmer last took charge of a Royals fixture last month, during our 2-1 home defeat to Millwall.

Nik Barnard and Nick Greenhalgh will assist Woolmer during the week, while Stephen Martin will be the fourth official on this occasion.

During Ward's 25 league games to date, he has issued 74 yellow cards and one red card.

A polite reminder to our supporters that no unauthorised access will be permitted to this game, so supporters must not travel to St Andrews.


With a trip to the second city nearing, we spoke to another regional journalist who has been covering their team home and away, in order to get the inside scoop on Wednesday night's opponents,...


Our visit to Birmingham City on Wednesday 17th March has been selected for live broadcast on Sky Sports, and will kick off at 7.45pm.

Birmingham City hit the Royals with a second half sucker punch that denied us anything from a scrappy physical affair at St Andrew's this evening.

In a frantic start from both sindes, Birmingham threatened early through two crosses from the right - the first skewed half clear by Semedo and the second glanced behind by the head of Moore.

But with less than four minutes on the clock, Lukas Jutkiewicz wrestled his way onto a lovely Bela cross from the left to beat Moore to a header and place his header past Rafael and inside the bottom right corner.

City were pressing the Royals well and putting pressure on the visitors in search of a second, a charged down Tom Holmes clearance fell to the fewet of Hogan just inside the box but he dragged his effort wide and the offside flag was raised regardless.

A worked free kick saw the ball dinked into Joao in space but his hooked effort was charged down and the Royals striker needed treatment for his angle which was caught in his follow through.

Reading were struggling to find their fluency though and Halilovic crossed from the right where Hogan flicked the ball on for Jutkiewicz - but Rafael was off his line quickly to collect the ball before he had to field a shot.

With half an hour gone, Olise and Richards couldn't prevent another cross coming in from the right and Moore's headed clearance fell to Roberts who half-volleyed a shot high over the bar.

Meite made Etheridge tip a 25 yard free kick over his crossbar with a sweetly struck set piece. Then Laurent thundered a volley wide of the target from range as the visitors started to find a foothold in the game.

McIntyre won a free kick and Olise delivered a delightful cross that needed heading behind for a corner. Olise raced over to take the corner and fizzed it powerfully to Meite at the back post who bulleted a headed home to make it 1-1.

Meite bore down on Etheridge trying to get to a long Olise ball before the City keeper, but Etheridge just won the race to clear the danger.

On the stroke of half-time, no fould was awarded when Richards was bundled over in midfield and Birmingham nearly took advantage; Rafael had to parry a powerful strike from Gardner and the ball luckily ricocheted off a Reading body and back into the palms of the Brazilian.

Reading began the second half on the front foot and had appeals for a penalty turned away when Joao's foot was clipped as a Birmingham leg cleared a cross from Olise.

Meite turned well in midfield and nearly threaded a pass through to Joao in a reversal of the combination that worked at Forest at the weekend - but the pass was read by a blue shirt and the attack broke down.

Semedo delivered a low cross from the right that Meite ghosted onto and directed high over the bar from a good position, but the offside flag went up against him anyway handing the hosts a free kick.

Reading had enjoyed much the better of the second half, but City struck with a sucker punch. A corner from the right wasn't cleared and the ball popped up for Harlee Dean to head perfectly inside the left upright and beyond the dive of Rafael to make it 2-1.

Reading nearly levelled again when Olise's sweetly struck volley was saved by Etheridge low to his right, Puscas followed it in but the keeper clawed the ball away from his toes and denied the Romanian a stab at goal.

Reading upped the urgency but Ejaria's driving run ended with a fine block from Dean to deny the Royals substitute the sniff of an equaliser.

Nothing was coming off for Reading and a nice combination between Ejaria and Yiadom ended with an overhit pass that Olise couldn't catch. Then a good ball into a crowded box resulted only in a free kick for the home side after a Puscas push.

Three minutes of injury time elapsed on a frustrating night for the Royals.


With a trip to the second city nearing, we spoke to another regional journalist who has been covering their team home and away, in order to get the inside scoop on Wednesday night's opponents,...


Our visit to Birmingham City on Wednesday 17th March has been selected for live broadcast on Sky Sports, and will kick off at 7.45pm. 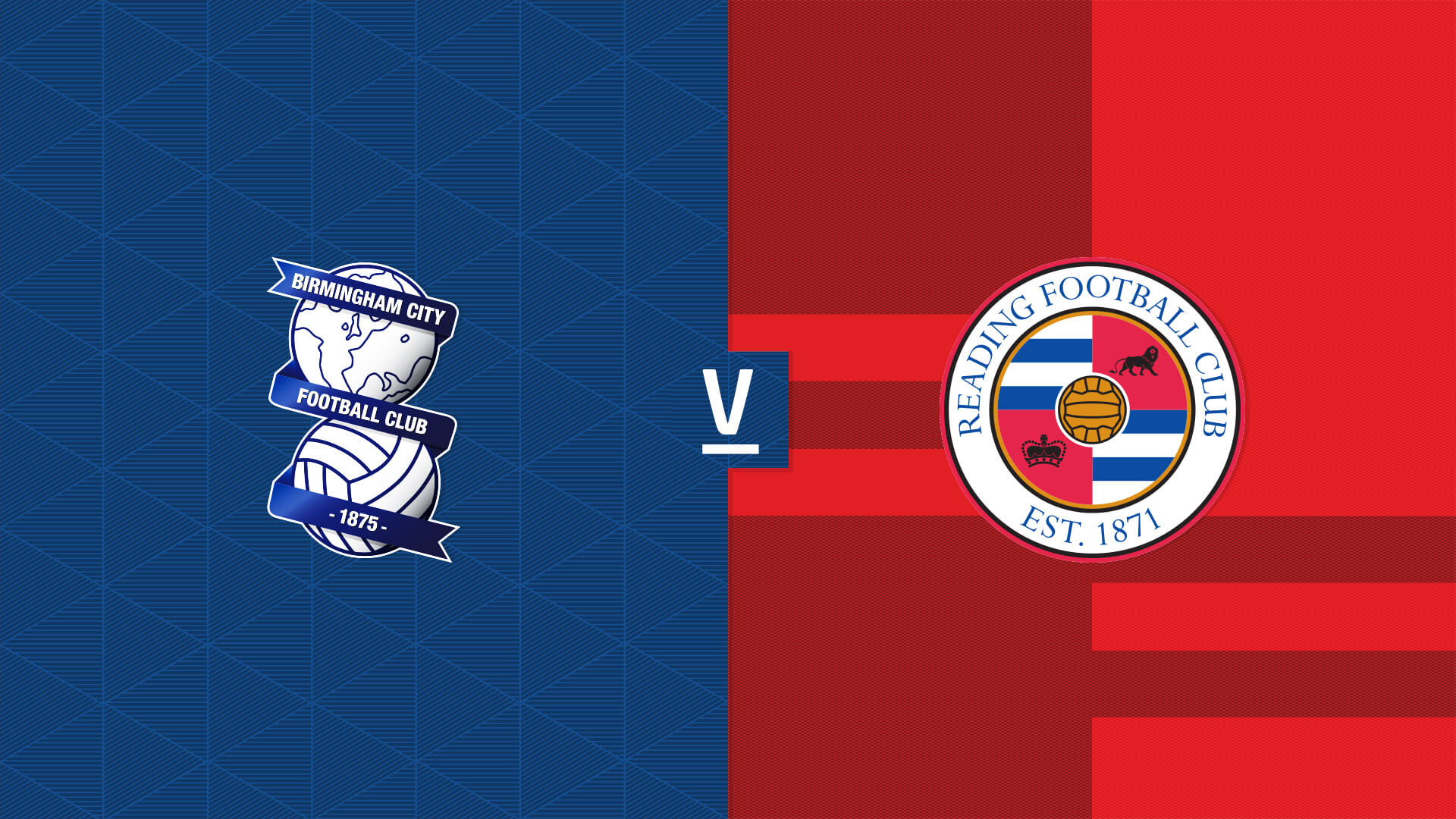 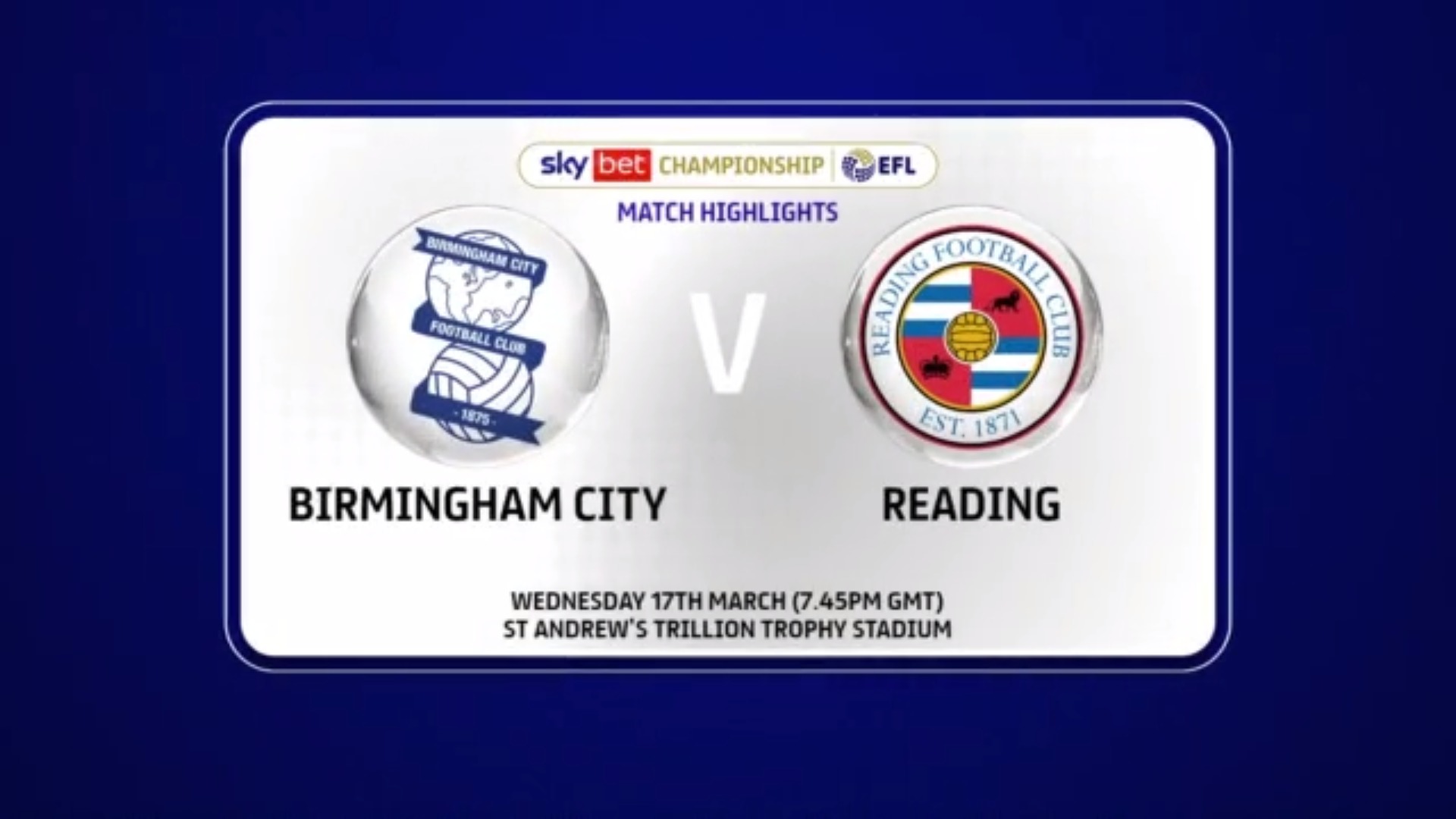 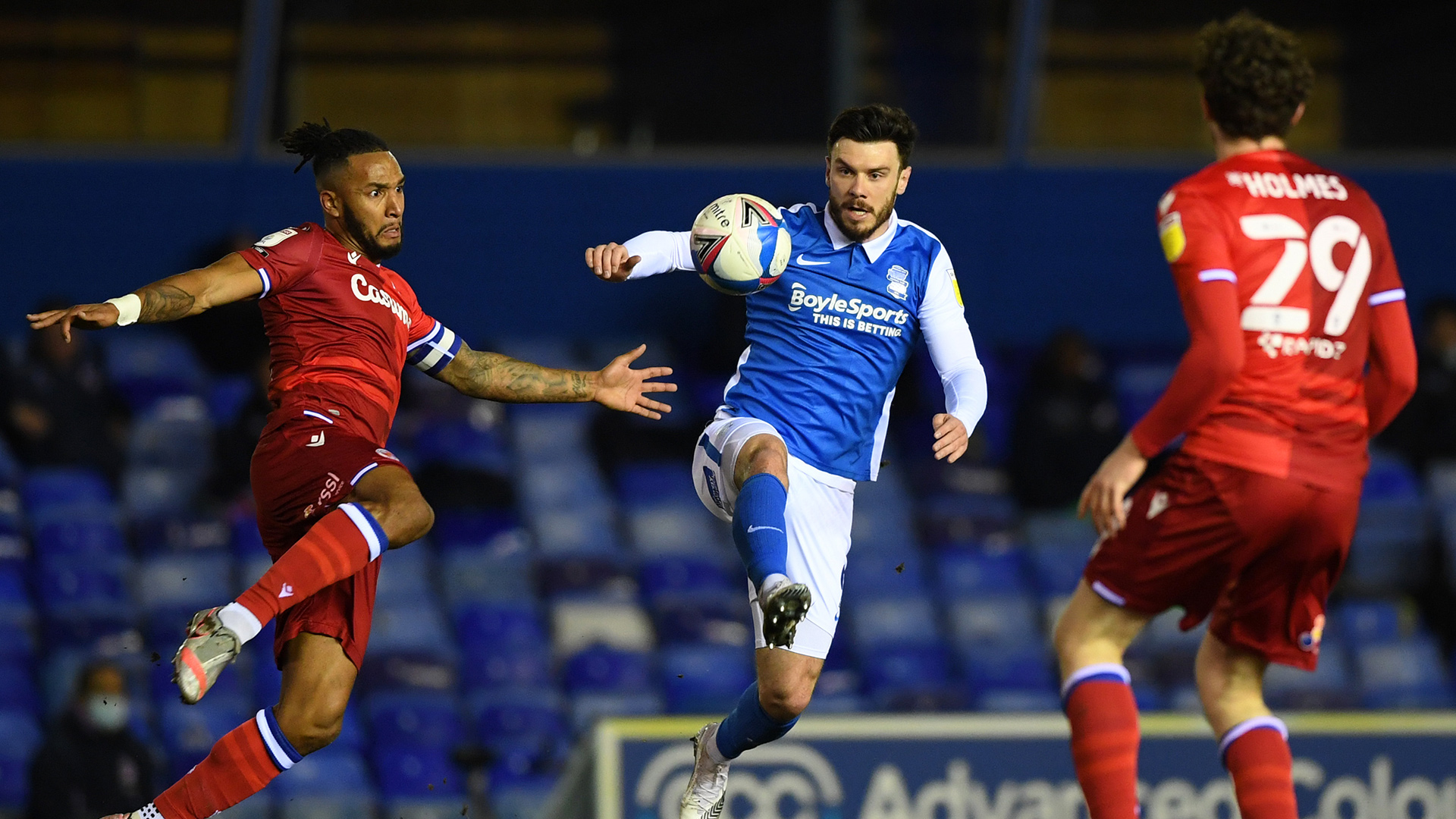